An Unlikely Alliance of Rebels and Global Financial Markets 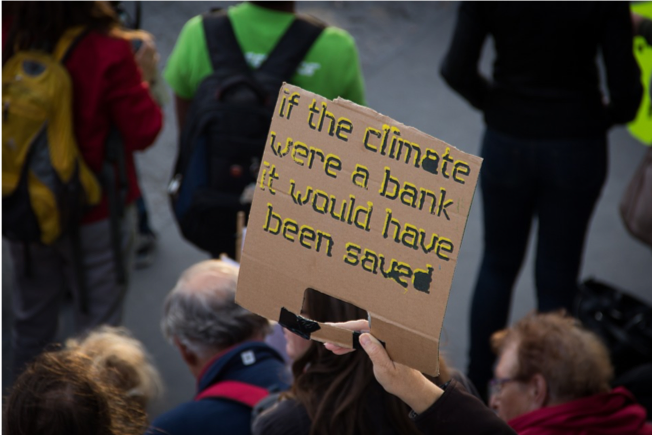 The activists of Extinction Rebellion, the climate change pressure group, have had a busy couple of weeks. Thousands of their supporters have been arrested in a series of protests from Australia to Austria, from Switzerland to South Africa. Their non-violent protests paralysed cities, airports and business centres. Many ordinary people are drawn to join in because of the perceived inaction of governments in the face of climate change.

Extinction Rebellion’s demands include that governments “wake up” and declare a climate emergency. They want to see immediate and decisive action from politicians, to match the passion and commitment show by their supporters.

The approach is unlikely to succeed. Politicians know that radical climate policy agendas don’t win elections. Banning air travel, limiting car use and cutting the carbon footprint of foodstuffs may well be necessary to reverse climate change, but they involve hardship and sacrifice for the electorate, which rarely wins votes.

So the standoff between the rebels and governments continues. But the rebels may be missing a trick by focusing primarily on policymakers. Help may be at hand from a much more unlikely source: We may be about to see an alliance between the protesters of Extinction Rebellion and the global financial industry.

Momentum to address climate change in the financial sector is coming from two directions: a “bottom-up” drive from individual asset managers, pension funds and insurance companies who have taken the strategic decision to align their portfolios with ESG principles. This move is driven primarily by the demographic changes bringing a new generation of millennials into the investment universe, who are far more concerned with ESG issues than their parents’ generation. Tomorrow’s investor is going to be much more concerned with the environmental impact of their savings. This generational change-driven trend has now been joined by momentum from a “top-down” source: central banks and supervisors.

In December 2017, eight central banks came together to form the Network for Greening the Financial System (NGFS). Since then, these eight have become 46 central banks and supervisors and a further nine observers, with representation from five continents. Together, these institutions supervise many trillions of dollars in the banking, insurance and pensions sectors, and the aims of the NGFS are starting to have an impact. When regulators and central banks are recommending and driving a fundamental change in approach, the firms they regulate will have to fall into line.

One of the founders of NGFS, Mark Carney, Governor of the Bank of England, has broadened the scope of the debate: Speaking at the inaugural Task Force on Climate-related Financial Disclosures summit in Japan, Carney said: “Firms that align their business models to the transition to a net zero world will be rewarded handsomely. Those that fail to adapt will cease to exist. The longer that meaningful adjustment is delayed, the greater the disruption will be.”

These words, coming as they did at a conference to increase and improve climate-related disclosures, should be a wake up call to all listed companies and debt issuers: if you are going to access the capital markets, you should be aware that your impact on the environment is gong to be as meaningful for investors as your balance sheet.

Mobilising financial infrastructure to drive climate change is not new: Green bonds have been around for several years, for example. What is new, however, is the increasing momentum and demand for green instruments and other financial products from mainstream business leadership.

Issuance of green, social and sustainable bonds rose 70% this year to over $200 billion, according to Bloomberg. HSBC, the leading underwriter of green bonds, estimates the market will rise to $1 trillion by 2021. While this remains a tiny fraction of total debt in issuance, the speed of adoption, and the top-down push from the likes of NGFS means that the asset class will become increasingly attractive. And that, in turn, will drive companies to adopt climate change mitigation actions into their corporate strategies.

Here in the Gulf, there will be no disruptive demonstrations by Extinction Rebellion, no mass arrests or civil disobedience. But two UAE regulators – ADGM and DFSA – are full members of the NGFS, and it is likely that the Saudi Arabian authorities are watching developments closely. And of course the dramatic demographic change that is driving so much ESG adoption is particularly acute here, with our very young population.

Speaking at an event in Abu Dhabi recently, Michael Bloomberg, Chairman of the eponymous media company, praised the UAE for taking climate change seriously, for moving forward with clean energy initiatives and carbon reduction schemes. And he pointed out that, despite the USA’s withdrawal from the Paris Agreement of Climate Change, American companies and individuals are still making progress with greening the US economy.

It is not far-fetched to predict a point when top-down action will coalesce with bottom-up behaviour change and drive the meaningful changes necessary to deliver a greener planet. We may be on the cusp of that moment.