In the GCC, however, the markets have underperformed the global benchmark, with the MSCI GCC Countries Index managing to rise less than 1% in 2017. The GCC index constituents are traded at 1.53x P/BV and 13.75x P/E at the end of January 2018. 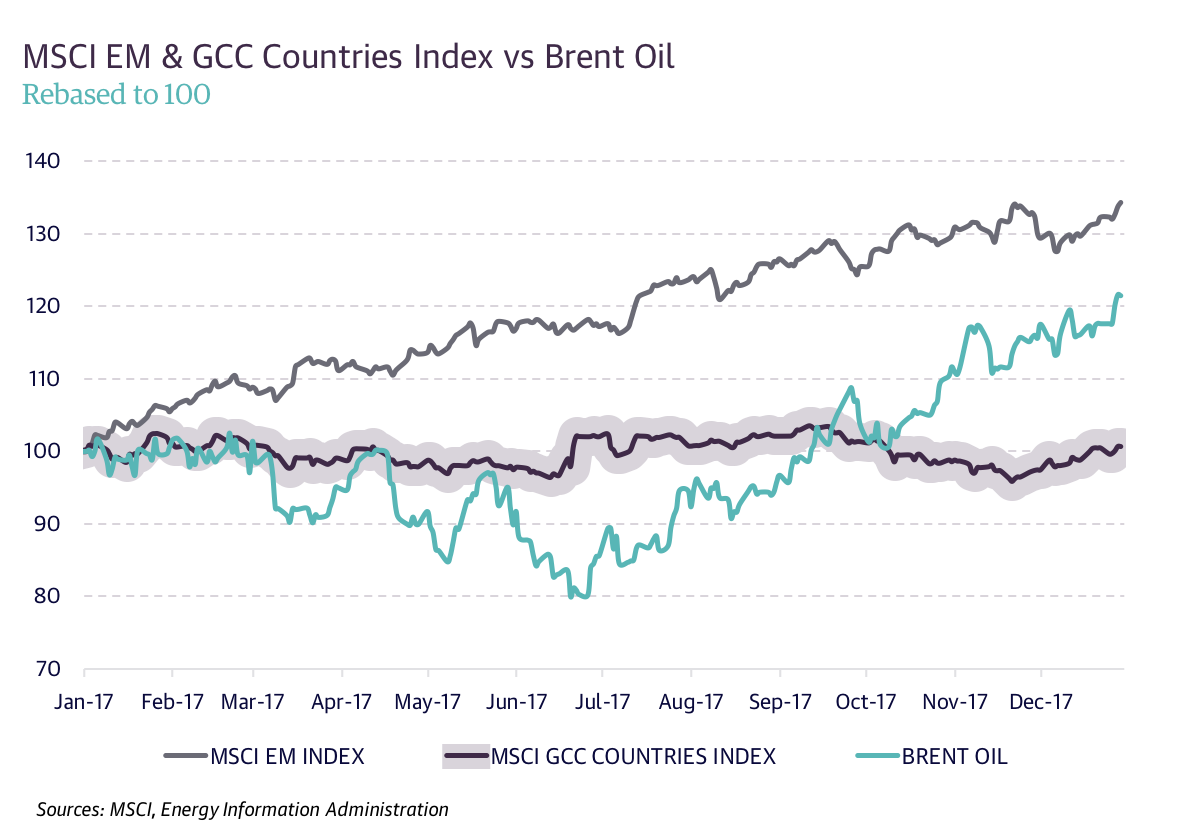 Why the divergence? And should we expect the GCC to catch up with the likes of Mexico, Turkey and India? And what does this mean for foreign institutional investment in Gulf listed firms?

Much was promised with the inclusion of GCC companies in EM indices, but that promise has yet to be realised. While the underperformance of the Gulf’s markets has many causes, the rising oil price should have been a boost to the GCC; but the opposite has been the case. Because while Mexico and Russia and Nigeria, for example, are also major oil producers, their economies are far more diversified than those of the GCC.

So why have our capital markets not risen along with oil?

The answer to that conundrum may lie in an undesired consequence of OPEC’s move: while the Gulf’s revenues have been strengthened, so has the outlook of another oil producer, one that rivals Gulf oil producers for output, but is not an OPEC member: the US Shale industry. The US Department of Energy estimates average shale oil production of 10.3 million barrels per day in 2018 – narrowly surpassing global leader Russia and Saudi Arabia.

And here is where the petro-paradox appears: As the Gulf countries and OPEC cut supply to raise the price, US shale production becomes more economically feasible. Net result: growth in global reserves, which puts downward pressure on the price once more. For every dollar increase in the oil price through OPEC supply cuts, an extra dollar of downward price pressure from US shale is created.

And markets have noticed. They are saying that the days when OPEC could turn its economies up and down like the volume switch on your iPhone are over. A rising oil price is far more fragile than used to be the case. The link between oil price and listed company valuations in oil-producing countries has been suspended.

There are two important conclusions to draw from the petro-paradox:

First, the need for all the Gulf states to diversify their economies has never been more imperative. And, like it or not, until that diversification is achieved, EM status will continue to be a mixed blessing for our markets. It is time for governments to step in and set an example for listed companies. They need to take a more pro-active approach to educate and persuade the investment community that GCC listed companies are much more than an oil story. This is where first-class investor relations at the government-level comes in.

Second, and perhaps more important in such an uncertain environment, investor relations with a professionally presented investment case has never been more crucial for corporates. To investors in New York or London or Singapore, the Gulf equity story has been an oil price story. Companies that take active steps to break from the crowd, to differentiate through educating investors on their long-term strategies and business models, will find a way to distance themselves from the petro-paradox.

The potential to unlock upside valuation through investor relations has never been greater, but it will require a scientific approach to make it happen.