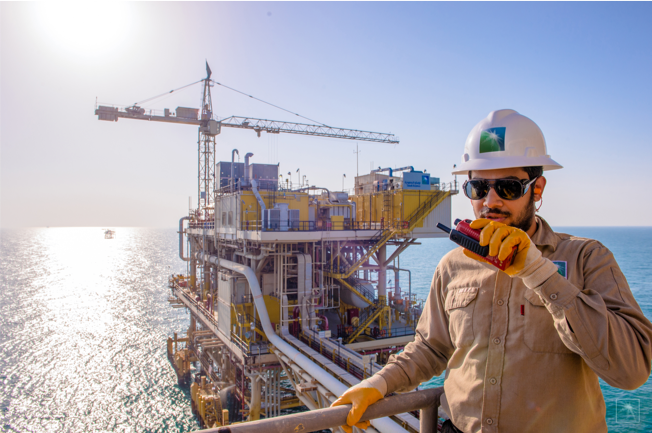 The most eagerly anticipated initial public offering (IPO) ever to come from the Middle East is upon us. Saudi Aramco, the world’s most profitable and largest company, comes to market in a few days. The listing has been perhaps the most scrutinized of any flotation and took a capital markets story from the business pages to the front pages of the world’s media.

However, there is one area that has received little public commentary, but which will be instrumental in driving the future success of the deal: Saudi Aramco has set a high benchmark in disclosing and detailing its environmental, social and governance (ESG) credentials.

The company has broken the mold of regional disclosure norms with its full and comprehensive documentation and prospectus, which shares the inside information on its business, risks, financials, and outlook.

The IPO prospectus was 656 pages in length and went into full detail of the risks and opportunities presented to investors. The prospectus also reveals that Aramco is one of the region’s most sophisticated companies in ESG terms.

The company presents its ESG credentials logically and in full, making clear the strong corporate culture that has created a best-in-class ESG environment. As an oil business, Aramco could be seen to be on the wrong side of history. An increasing number of institutional investors are shunning the sector, epitomized by Norges Bank, manager of Norway’s sovereign wealth fund – the world’s largest. In another indication of how out of favor the oil business is, Apple’s market cap recently overtook the entire energy sector in the USA.

Aramco has addressed this quandary head on. Outlining the environmental risk factor in the prospectus, the company said that, “Climate change concerns manifested in public sentiment, government policies, laws and regulations, international agreements and treaties and other actions may reduce global demand for hydrocarbons and propel a shift to lower carbon intensity fossil fuels such as gas or alternative energy sources.”

Aramco does not spin its credentials, but instead gives hard facts and analysis. It discloses in minute detail the carbon cost per barrel of oil extracted, and reveals that it has the cleanest operations of any oil major or national oil company.

The company details its investments in green energy and sustainability initiatives both in the Kingdom and abroad with international partners, for example deploying renewable energy systems in office buildings and industrial facilities such as production wells and bulk plants, the prospectus noted. Saudi Aramco has been adopting and implementing energy efficient technologies and practices to reduce its energy consumption, reduce its greenhouse gas emissions, improve its plant and facility operations, and promote an environmentally conscious corporate culture.

In 2011, the company established a water conservation policy that uses best practices and technology to promote the use of sustainable sources of water, optimizing water demand, maximizing wastewater reuse and minimizing water loss.

Beyond its environment related policies, Aramco has also developed the role it plays in society as a corporate citizen. The company engages in a range of corporate social responsibility projects and initiatives to support the communities and the environment in which it operates.

Ranging from the building of universities, cultural centers, wildlife sanctuaries, training academies and entrepreneurship schemes, the company has also taken a leading role in promoting and supporting the right of women to drive in the Kingdom following changes to the law in 2018. The company opened a driving center with the objective of providing training to Saudi Aramco female staff and employees’ female family members, as well as to encourage a safer and friendlier driving environment on the Kingdom’s roads, according to the prospectus.

Finally, in the field of governance, the company discloses the responsibilities and remit of the board; gives a detailed description of the legal and regulatory framework; gives detailed biographies and roles of all board members and senior management; lists the roles and responsibilities of all governance committees – nomination, audit, compensation, risk and health and safety. Aramco also discloses details of compensation policies and senior management pay.

What made Aramco – until recently a secretive organization – reveal its ESG practices in such detail? It is a sign of how ESG factors have come to dominate investor thinking that, without this level of disclosure, Aramco would have found it much more challenging to attract institutional money.

What the company has succeeded in doing, by investing so heavily in its ESG disclosure and activities, is set a new benchmark for regional ESG disclosure.